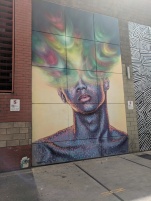 It is 18 degrees today in Adelaide, yesterday it was 35 degrees and 36 the day before. It’s November and I’m Canadian. The incongruity of Christmas displays and people in summer clothes is seriously messing with my children’s heads. Living in Adelaide is a bit of an adjustment, but it is what we signed up for until April 2018.

One of the challenges of traveling with children, especially the highly regimented kids we have, is creating a reasonable substitute for the sense of normalcy and routine we had at home. How important this is for children became evident very early in our travels, so last night I found myself sitting at my laptop about a foot away from a beginner drum pad class while watching Rowan getting chanter instruction from the City of Adelaide pipe band’s pipe sergeant in the adjoining room. Tonight, we are off to soccer academy with both kids and they are pretty happy with our efforts to overschedule them once again. We have been fortunate to find these kinds of opportunities here, but then there is a lot to like about Adelaide.

My overall impression of Adelaide so far is decidedly positive. It’s the kind of place you look at and wonder why we don’t live like this on a regular basis. The people here are friendly, they have a great public transit system, the city has integrated cycle lanes and traffic lights, the minimum wage is $17.29/hr, the city centre is surrounded by extensive parkland, there are more restaurants per capita here than anywhere else in Australia and today Australians voted overwhelmingly in favour of same-sex marriage equality. The celebrations have been going on all day and from the sounds outside our window, likely to continue into the night. This is interesting because Australians strike me as a conservative, rule following, bunch. There is, however, a contrasting and refreshing “get it done” attitude here that is familiar to this ex-Albertan. There are, however, a few things that are well nigh unfathomable about life here to a Canadian.

I’m sorry, but a pint is a 16 ounce drink, not 330ml and I object to having to renegotiate my mortgage for a round of drinks. Also, who ever heard of serving a burger without a side of fries, salad or something else edible to keep your poor burger from looking so forlorn and lost on a plate. For that matter, who ever heard of charging $23.00 for a burger then asking for $9.00 more for a dish of fries? What is curious to me, is that while I feel a sense of outrage, people here take it in their stride. Aussies make good money and they like to spend it. That’s a good thing, because robbery by retail is pretty much the norm here. Canadians only expect this kind of abuse at a hockey game or an overpriced concert. I am working on not muttering obscenities under my breath every time I look at a menu. Still, it’s a lifestyle with appeal.

What I really love about Adelaide though, is that being a Canadian is perfectly fine here. It is not a huge cultural adjustment being here; there are rules and laws that are much like our own, people will drive a Lexus SUV with bull bars, people are polite enough not to assume you are American, the pace of life is good, there are plenty of amenities and opportunity and best of all——–not a snowflake to be found! I have a feeling it will be hard to say goodbye to Adelaide.