On the 26th of July we went for a walk in Port Rexton on the Skerwink trail. We started at around eleven. The trail was supposed to take only one hour, but it took me way longer than that because, me being me, I stopped every five minutes to take a picture. And the worst part was that we had hardly even started the walk when my memory card decided to go and have no space left! I swear that’s the fiftieth time that’s happened since I got it. So after that I had to steal my mum’s camera. The walk was beautiful, and most of it was along the cliff so we got some great pictures of the ocean. We had some pretty amazing views up there. 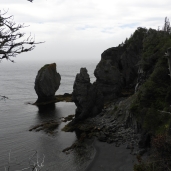 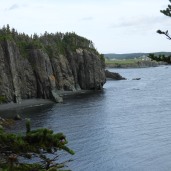 view of the cliffs

rock in the water

The whole time we were on this walk the fog was slowly but surely rolling in. At one look out point you can really see what people mean by a wall of fog.

Across the bay there was an island that look super cool because you could see how the fog covered the island like a blanket.

After about five minutes of gazing dreamily at the amazing view we continued walking. Up some nearly non-existent stairs, down a slope over a stream and onwards through the strangely short forest. After a while we saw the town of Trinity. We joked that the guys were probably already at the brewery, which is where we intended to go after we had finished, since they had marched on ahead at the start of the walk. But turns out they were waiting for us at the end of the walk (what a surprise). So, the walk consisted of amazing views, beautiful plants, like the wild irises, and some cool fog.

me at one of the lookout points

One Reply to “A walk in Newfoundland”