Here we are, a mere eight months after we said our fond, slightly misty eyed, farewells to Adelaide, once again in beautiful South Australia. This time around, there are only two of us. Sadly, because of the school year and the nature of the trip, we had to leave Rowan and Pippa (our erstwhile and intrepid world travelers) behind—-much to their chagrin. So, two companions down and travelling light, here we are, doing a lightning tour of rural South Australia. Why? Long story made short is that Rachel’s research required a return visit to South Australia. Anyway, this post isn’t about the research, it’s about the experience.

We arrived in Adelaide on Sunday November 4th after a fifteen hour flight from Vancouver. Despite the pleasant service by Air Canada, those seats don’t get more comfortable as the hours tick by. International travel is a bit of an endurance contest. Nonetheless, we touched down in Adelaide at noon, grabbed our luggage and with the use of our handy metro cards, we were on the bus to our hotel. It was kind of weird being back in Adelaide. Everything was pleasantly familiar, which was handy, because we had a bunch of errands to run before Rachel could be ready for her first library meeting the following morning. Monday was fun, especially for me, as I got to spend the morning wandering around downtown Adelaide, checking out some familiar haunts and trekking out to the oval to get a picture for Rowan. After Rachel’s meeting was done, there was time for lunch and a bit of window shopping before we grabbed our luggage and headed back to the airport for our flight to Ceduna, a town near the western edge of South Australia. Ceduna is where our adventure really begins, and my part in the story really kicks off.

We touched down at Ceduna airport at 7:30 p.m and picked up our rental car. We had asked for a small sedan, but Budget provided us with a big diesel SUV. Cool, they obviously know more about driving around these parts than I do. Driving is why I’m here—-logistical support. I was eager to get behind the wheel of this big Holden, but the little voice in the back of my head kept saying, “ Are you sure you can drive on the opposite side of the road?” As they say here, no worries. We jumped in and headed off into town, at dusk, on the wrong side of the freakin road! Awesome! Turns out, that after 30 years of driving on one side of the road, it’s pretty easy to switch to the other. Anyway, we arrived at the first of our rural hotel stops for this trip to find that it really is a truck stop motel. Exactly like you imagine. Not wanting to eat at the gas station convenience store, we headed into the town centre and found a hotel dining room with a great view of the foreshore. We also discovered that hotel dining rooms typically stop serving food after 8:30 p.m. It is a good thing to remember, as we have already squeaked in just under the wire a couple of times on this trip. After dinner we headed back to the motel to get ready for the next day and try to catch up on some much needed sleep—–jet lag, ugh! 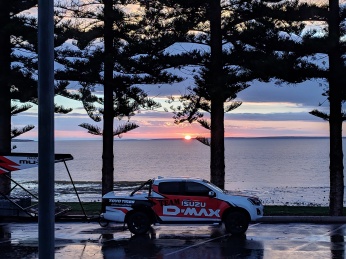 Tuesday morning saw us heading off to a place called Streaky Bay, where Rachel was due to meet with the school community library manager late in the morning. Remembering to stay to the left, we headed off for a very pleasant and picturesque drive along the coastline to our destination. It was a little bit disconcerting at first to look out of the window on one side of the vehicle to see a landscape that looks very much like Saskatchewan, with endless grain fields and then turn to look out the other side at the ocean. Certainly not what we are used to. Streaky Bay is a lovely little seaside town that once had a thriving fishing industry until, like so many other places, unrestricted harvesting decimated fish stocks. Today, it is more of a sleepy tourist spot with beautiful vistas and a bay full of very big sharks. Fortunately for us, it was too chilly to go swimming, so in the afternoon we joined the rest of the town at the pub to watch the Melbourne Cup. For those who have never heard of the Melbourne Cup (don’t be embarrassed, we hadn’t either before arriving in Adelaide last year), it is the premier horse race of the year. In Streaky Bay, they were cheering for a local jockey, who eventually won the race. It was quite the experience. After a late afternoon wander around the town—–which, frankly, didn’t take that long, we rounded out the day with a dinner at the Streaky Bay hotel. The next morning, after another uneventful motel experience, we headed down the Eyre Highway to Karcultaby Area School.

I have never been to a school like Karcultaby before, but I’m really glad I had the opportunity to see it. Located in the middle of a paddock (yes, that’s right), the school serves two neighbouring communities, has extensive grounds, an agricultural programme, an above ground pool, and a groundskeeper with an encyclopedic knowledge of everything needed to keep the place running. I was pretty stoked to be offered a tour of the grounds and ended up chatting with the groundskeeper for a good couple of hours about everything from stock raising to water conservation. I would have loved to have stayed longer, but we had a late afternoon appointment further down the highway in Wudinna and had to press on.

There is a thread that has emerged surrounding the character of these small towns that we have been fortunate to visit. They remind me very much of rural Saskatchewan; hardworking, friendly people, optimistic but realistic and tied primarily to one industry. Still, they have their charm and Wudinna was no different. By now, we have a pretty set routine: breakfast, check out, Rachel goes off to meetings and I wander around town until she is done. Given the size of these towns, I usually get a couple of laps in before Rachel is done. Wudinna provided us with some charming surprises, especially the fabulous coffee shop and café with a wonderful selection of vegetarian dishes and amazing espresso. It was the kind of experience that reminds you that it is worth taking the time to detour into those small places you would usually pass on your travels. By late afternoon, however, we had to pack up and head down the highway to Kimba.

Kimba is notable for a few things, including an amazing mural across the Viterra grain terminal and the fact that it is exactly halfway across Australia. Kimba also outdoes itself for hospitality as far as I’m concerned. Not long after we had settled into the Gateway Hotel (where we were given a complimentary upgrade), the local librarian came looking for us to invite us to a book launch at the library. It was a pretty cool experience, meeting the author, rubbing elbows with community members and being invited to stay for the after event supper. So cool. The whole experience was wonderful. The following morning Rachel went about conducting interviews, while I hung out. After having lunch with the mayor and the town manager, we rounded out our time in Kimba with a guided tour of the museum. An amazing collection of early settlement buildings and agricultural equipment—-much of which still functions. With that wrapped up, we headed back down the highway for a three hour drive (still getting used to left hand driving) to Ceduna to spend a quite weekend catching up on work and soaking up the sunny weather. Next week, the adventure begins again!