Actually, it’s officially called the Christmas Pageant. Why? Great question. I have no clue why it’s called that. Anyhow, It’s an hour and a half long parade full of over-the-top floats. They were actually kinda cool, albeit a bit cringy.

It was really weird to see all of these floats that people would usually associate with Christmas. It was very different from our parades that we have in Saskatoon, since most people don’t want to acknowledge winter until it actually sets in. Especially since lots of these floats were supposed to be covered in snow.

I applaud their efforts but, coming from a guy who lives in a country that is covered in snow for 5 months, they weren’t quite at my standards of what snow is supposed to look like. But, still, it wasn’t too bad when you realize that very few people here have actually seen snow. Anyways, it was really good to see a parade like that. I’m hoping to see more weird (but cool) stuff throughout my time here.

And no parade is complete without some star wars 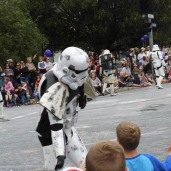 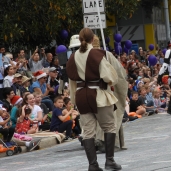